The Villans have endured an extended slump in form away from home for many years. It precedes Bruce's appointment, stretching back through several managers. What is going wrong for Villa on their travels?

Aston Villa finished sixth for the third consecutive season under former manager Martin O'Neill in 2009-10. The Villans enjoyed the third-best away record (19 games: nine wins, five draws, five defeats, 32 points) in the Premier League during that campaign. The Midlands outfit picked up more points on the road than Arsenal, Manchester City, Tottenham Hotspur, Everton and Liverpool. 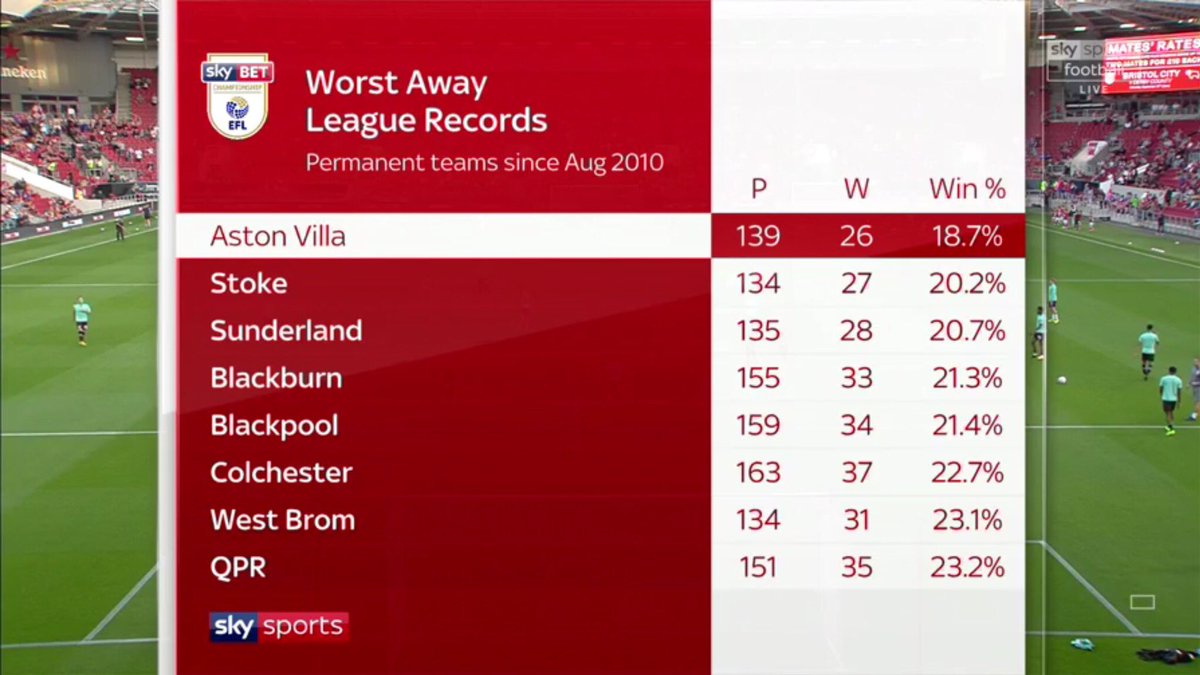 Sky Sports Statto
SkySportsStatto
Follow
Aston Villa have the worst away league record amongst the permanent members of the top 4 divisions since Aug 2010 https://t.co/RzYnA74AE1
Follow
19:32 PM - 25th Aug 17
28
43
Aston Villa have averaged less than four road wins per season since their peak under O'Neill. From 140 away games in the ensuing seven-plus seasons, the Claret and Blues have picked up a paltry 26 victories (19%).

The last two years have been extremely disappointing. There was just one win to show during the side's ill-fated 2015-16 Premier League relegation campaign, only four from 23 Championship journeys in 2016/17. The point taken at Ashton Gate was the first in three outings this season.

thevillazone
thevillazone
Follow
Stat: Aston Villa have only won 4 out of the last 43 away games #avfc
Follow
17:24 PM - 16th Aug 17
45
77
The club's form certainly hasn't affected the support. Aston Villa continue to sell out their away allocation in the Championship. The traveling contingent remain in full voice for the majority. It is the side that is withdrawn. Failing to adopt supporters' enthusiastic, aggressive approach may be the reason the club fares so poorly on its travels.

Aston Villa often set up to frustrate their opponents rather than win the game. The squad poses little threat in the final third, spending large portions of matches defending their own. With the club's away history in the back of every player and staff member's mind, they may be reluctant to be too bold.

Just 14 of Villa's 47 goals in the Championship last season came away from home, as did 13 of their 16 defeats. It's clear they aren't getting after sides when travelling team, then have no answer when falling behind. Aston Villa was the only Championship side not to rescue a point after falling behind on the road in 2016-17.
If Bruce wants to reverse his side's traveling fortunes, he needs to coax them out of their shell. Villa need to take the game to away opposition as heartily as they do at Villa Park immediately and throughout road matches, regardless the score.