What do Atletico Madrid have in Gelson Martins?

On 25 July, Atletico Madrid signed Gelson Martins from Sporting CP on a five-year deal. A free transfer, the 23-year-old, along with other players, had terminated his contract with the Portuguese club following a training ground attack from fans. The Leoes were confident of getting around £40 million for the winger, who was linked to several European giants. However, after the ensuing fallout, they lost him for zilch.

Martins scored 18 Primeira Liga goals, as well as provided 17 assists, during three seasons at Sporting. After announcing his decision to leave, there was much interest. He chose Atletico due to Diego Simeone's influence.

While playing for Sporting's B team, Martins represented Portugal at youth level. Following an impressive U-20 World Cup, he earned senior recognition, making his debut aged only 21. Less than two years later, the Cape Verde-born attacker was included in Fernando Santos' squad for Russia.

Martins is a typical Selcao right-winger, just like Nani and Ricardo Quaresma. He attempts to match foot-work, speed, agility and work-rate to rip around the pitch. His movement, often checking shoulders, is extremely rare. It helps him burst through defences easily. The Portugal international slows down to make opponents stand still before dribbling past and providing crosses. This is what he does best.

Martins usually operates on the right but can play both wings. He doesn't possess a perfect aesthetic, instead opting to maximise trickery and pace. His clever awareness, in tandem with the ability to stretch backlines, means he has no problem delivering balls into the box for teammates.

Not just an attacking threat, Martins is a ferocious tackler who regains possession before initiating important counter-attacks. He had more interceptions in the final third (26) than any other Primeira Liga player last season. His positioning is a great asset.

Against Real Madrid two years ago, Martins was unleashed on the European stage. He dribbled roughly 40 yards, giving Toni Kroos a hard time, before nutmegging Casemiro and being fouled by Luka Modric. The Atletico wide man is adept at creating space, attempting one-twos with teammates in order to disrupt the opposition's defensive line. He enjoys getting into dangerous areas, while also happy to drop deep, collect the ball and dictate play.

Gelson is one of the best players I've seen in the Portuguese league in recent years. There are few wingers who offer such a combination of speed, intelligence, consistency and technique. He's got the power to destroy any defender in the world and his self-confidence is unshakable.

Though he has many positives, Martins must improve on some things. His playing style is all about individuality. In big matches, teamwork is important. The winger's involvement in the build-up is strictly average. His decision making in front of goal is another worry. He takes too much time on the ball and at times seeks the glory. His quick feet need complementing with a better first touch, too. Luckily, his prime remains a few years away.

Simeone has numerous raw talents at his disposal, although recently, Atletico have never had a wing duo to perfect the Argentine's 4-3-3 system. Losing both Nicolas Gaitan and Yannick Carrasco to Chinese side Dalian Yifang left holes at the Wanda Metropolitano. Adding Thomas Lemar and Martins has surely opened up an option to play more directly. Doing so would not only allow Antoine Griezmann valuable resting time, but also give Rodri the chance to shine as the deep-lying playmaker. 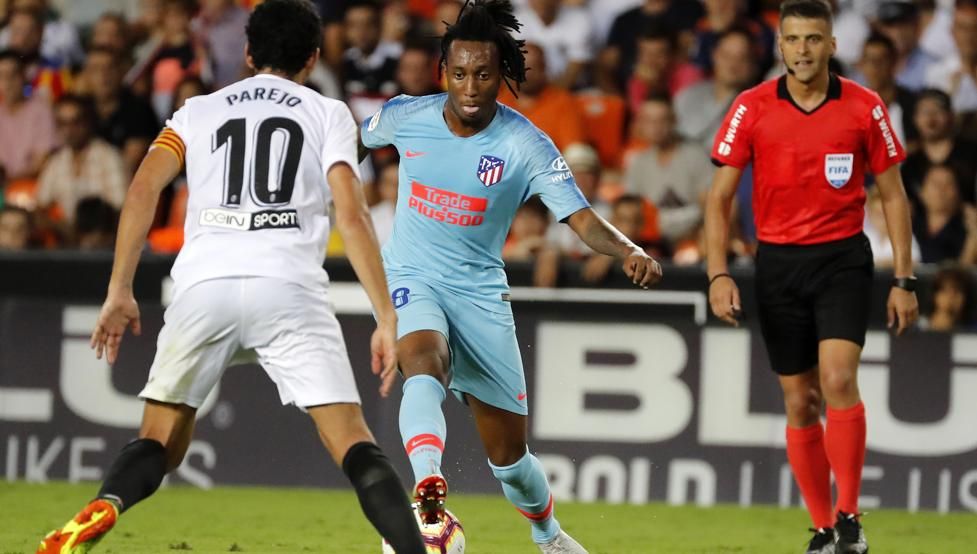 Statman Dave
StatmanDave
Follow
Gelson Martins completed the joint most dribbles (2) of any player on the pitch on his Atletico Madrid debut.

Having played only 57 minutes for Atletico so far this season, Martins has much more to offer. If used correctly, he can help turn La Liga tables. Due to raw potential, his name could one day be engraved outside Atleti's stadium alongside past greats such as Diego Forlan and Sergio Aguero.