Clubs and managers approach transfer windows in different ways. Some prefer to splash the cash and use the opportunity to heavily reinforce their squad, while others only move when they must.

This summer, Atletico Madrid fall into both categories.

In 2013/14, Los Rojiblancos were the side which finally broke the cycle of dominance from Real Madrid and Barcelona. Under the lovable rogue Diego Simeone, they looked set to be a major European power once more.

Since their stunning La Liga triumph, however, Atleti have been serial bridesmaids in both domestic and European competition, save for a convincing Europa League success in 2018.

Antoine Griezmann was the driving force behind that victory, leading from the front with two goals in the final against Olympique Marseille.

The Frenchman has recently announced, though, that he will move on to pastures new this summer. Unsurprising, when considering the Europa League is the only major trophy he has been able to lift during his time in Spain's capital. No, the Spanish and European Super Cups do not count.

Griezmann isn't the only one. A number of regular fixtures will be leaving Atletico this summer as contracts expire, and some others may be joining them.

Griezmann announced on Tuesday that he was out of the door this summer, with La Liga champions Barcelona set to trigger his mammoth release clause and throw Philippe Coutinho’s future into even more doubt. The future of compatriot Lucas Hernandez is also decided. The defender moves to Bayern Munich in July, as the Bavarian giants begin a revolution of their own.

Club legend and captain, Diego Godin’s time in Madrid is up, too. The Uruguayan looks set to join Inter Milan once his contract expires, where he is expected to replace Milan Skriniar, the subject of major interest from England and Spain. 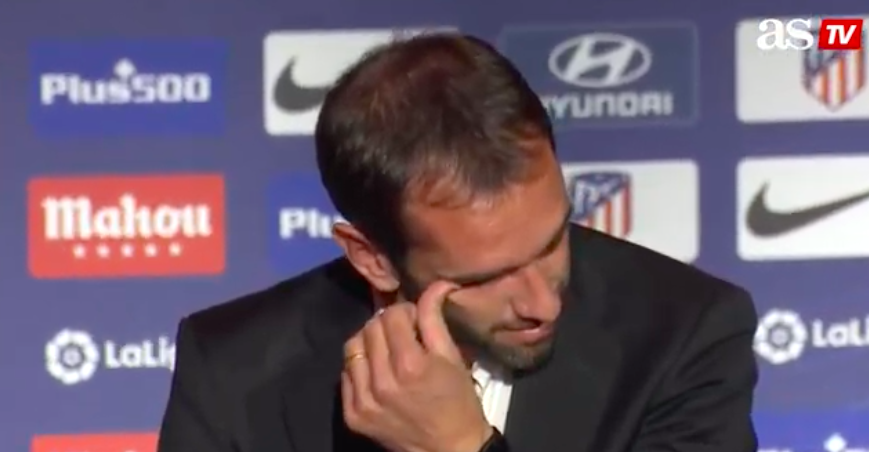 Fabrizio Romano
FabrizioRomano
Follow
Diego Godin started crying, then announced: "I'm going to leave Atlético Madrid, these are my last days here. Thanks to everyone, it has been my family". He's going to join Inter Milan on next days. 🔴⚪️ 🇺🇾 #Atleti #Inter #transfers https://t.co/S2aYtGR9Z5
Follow
12:12 PM - 7th May 19
697
3074

Full-back Juanfran was offered a new one-year deal by Atletico, but the 34-year-old elected to turn it down and will exit the Wanda Metropolitano. As will Filipe Luis, leaving Los Colchoneros desperately short in the wide defender department.

In addition to all those almost-guaranteed departures, Atleti face a battle to keep midfielder Rodri. The 22-year-old has become a regular in the middle of the park since Gabi’s departure last summer and is tipped to be a priority target for Premier League champions Manchester City.

With many first-team players destined for the exit, Atletico have been left in the lurch. Simeone has a major rebuilding project to get right if he is to field a competitive squad next season.

Luckily, yes. Losing so many players at once is not ideal - Griezmann in particular will be very difficult to replace - but Atletico have managed to tie-down one of their prized commodities to a new deal. It’s arguably the most important one.

Jan Oblak has been considered a world-class goalkeeper for a number of years now. Ever since Thibaut Courtois became a regular for Chelsea, the Slovenian has been a rock between the sticks, in a side notorious for being hard to score against.

Oblak is strong, athletic, and has great command of his area. His penchant for pulling off spectacular, acrobatic saves is the stuff of dreams for YouTube compilation makers. With David de Gea in rotten form in the last year or so for both club and country, the Atleti number one might just be the best out there right now.

It was rumoured for a long while that Oblak might be tempted to see out his existing contract and then seek pastures new. A new deal was announced in April, though. Now contracted to 2023 and with a reported release clause of €100 million, it would take a world-record fee to prise the stopper away from the Spanish side’s grasp.

Phew, so what next?

Replacing so many quality players in such a short space of time is a difficult proposition. Finding adequate alternatives for Godin and Griezmann is the priority. Bringing in a left back is also hugely important.

Nicolas Otamendi seems a shoo-in for the vacant spot at centre-half. Jose Gimenez has been a regular fixture alongside Godin for the past few years and will likely take over the mantle as the leader at the back. However, he needs another partner to rotate with Stefan Savic.

Otamendi has been on the fringes at Manchester City this season, and that probably won’t change now he’s 31. A move would benefit everyone. It would be a cheap option for Atleti, who face a significant overall outlay in the summer. If not, there are several other centre backs who have been linked with a move to the Wanda Metropolitano in recent months.

Even with Juanfran leaving, Santiago Arias and Sime Vrsaljko, who will return from loan at Inter Milan this summer, should be enough cover at right back to allow Simeone to focus his resources elsewhere.

Porto midfielder Hector Herrera is rumoured to be moving to Atletico on a free transfer this summer. But more important is the potential arrival of his clubmate, Alex Telles. The Brazilian is one of the best left backs around despite never having made the step to a ‘top five’ league. That could change in the next window.

Now to the most difficult to replace in Griezmann. Paulo Dybala has had a poor season, struggling in the shadow of Cristiano Ronaldo at Juventus. At Atleti, he could have a new lease of life as their star man.

Although Dybala will not come cheap, the massive fee received for Griezmann will give Atletico room to manoeuvre. The Argentine would almost certainly be open to a potential switch, too. Inter bad boy Mauro Icardi presents an alternative option.

Whatever happens, the transfer gurus at Atletico Madrid have a busy summer ahead. Not only must they invest heavily and wisely, but the new arrivals then have to gel in order to give Barcelona and Real Madrid some real competition in La Liga next season.