Is Tony Pulis entirely to blame for Boro's late-season slump?

A few months ago, all eyes at the Riverside envisioned a place in the Championship playoffs, if not direct promotion to the Premier League. Expectations lowered dramatically in the last few weeks. Now, Middlesbrough will be thankful just to make the playoffs. Football is secondary to the blame game on Teesside.

There was a point this season when Boro went on a six-match winning streak. August was truly a memorable month for the Teessiders. Going into September, Boro sat a pretty second in the table, tied on points with Leeds. That automatic ticket seemed feasible on Matchday Five. Heading into Matchday 42 it's entirely forgotten. Boro plateaued in midseason then took a nose-dive in March.

Last night's 2-0 win over Bolton, powered by two first-half goals from Ashley Fletcher, ended a seven-game winless streak. The abysmal run began with a goalless draw to Wigan at the DW and ended with six straight defeats. Four came at home. No Tony Pulis side is an offensive juggernaut but Boro scored just three times in the seven contests. It's the same problem the club endured in their final Premier League season under Aitor Karanka and Steve Agnew in 2016/17, resolute but completely bereft of enterprise.

The tension at the Riverside can be cut with a knife. Toothy grins from supporters are now snarls. The issues have sparked varying reactions. What or who’s happened to Middlesbrough?

Without question, this has been the most difficult period of Tony Pulis 14-month spell with Boro. His pragmatic style was initially greeted with unflinching support. But his Boro side ebbed and flowed over the last year. Promotion remains a myth. Large sections of the support believe Pulis should be gone yesterday. Such calls are synonymous with fans whose patience has worn thin over an excruciating campaign.

For the better part of the season, Boro clung steadfastly to a top-six spot, hovering between fifth and sixth. Standing his ground is a Pulis trademark. Climbing the table is not. 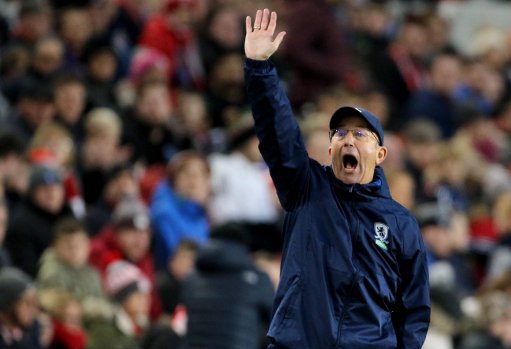 You off to watch them?

A one-trick mule, the Welshman hasn’t tweaked his system to create an attacking spark. Stubbornly, he sticks to his guns, choking the midfield, playing three centre-halves. It’s yielded nothing but misery.

However, there are issues on the pitch beyond Pulis.

The two-goal feast on Bolton was the only the third time since February began that Pulis' squad scored more than once in 90 minutes. Such a blunt attack does nothing but rob Boro of precious points.

Who are the culprits? Pulis exonerated his side’s creative engine:

“But I have never managed a football team that has created so many chances in my life, ever. Irrespective of taking them or not, especially in home games. It’s been really bizarre.”

If that's the case, why do the chances go begging?

It’s fair to say Britt Assombalonga and Jordan Hugill developed flat feet and a blunted nose for goal. Neither has appeared on the score-sheet in Boros’s last eight games. For Hugill, it's 11.

Ashley Fletcher lit his candle at a dark time for Boro, but his goals have been too few to lift the Teessiders. There’s a reason why.

The rearguard that can’t guard

If only Boro could keep more clean sheets. The last time they did that before Bolton was against Wigan, seven games ago. Boro’s porous defence is their biggest undoing. They haplessly handout goals to teams who have no business troubling their goal.

Darren Randolph's goalkeeping heroics kept the situation from appearing even worse. A clean sheet against the Wanderers was a welcome sight. The fans hope it won't duck back over the horizon.

Middlesbrough needs some luck if they’re to get into the green zone in the coming weeks. First, they must solve underlying issues at both ends of the pitch.