Has anything changed at Huddersfield Town?

After appointing David Wagner in November 2015, Huddersfield Town managed to reach the Premier League for the first time. Since then, the feel-good factor has cooled.

In May 2018, the Guardian's Paul Doyle praised Wagner as "a leader of rare charisma and intelligence" for his work with the Terriers. The praise was fully deserved following promotion and a desperately successful fight to survive their first Premier League campaign. Thoroughly unexpected draws against Chelsea and newly-crowned champions Manchester City kept Huddersfield up and left supporters holding the manager in the highest regard.

However, Wagner’s second season in the top flight became a real test of character. Staying up became less realistic. Off the pitch, the Terriers struggled to compete with big spenders to recruit a new first-choice striker. Wagner endured his most difficult spell at John Smith's Stadium. He stepped away in early January, terminating his contract with mutual consent and taking a needed break from football. He is now the manager at Schalke 04 in the Bundesliga.

Cast in a similar mould to Wagner, Jan Siewert succeeded his compatriot. He too managed Borussia Dortmund II and played similar football. Obviously brought in to replicate Wagner's success, it was asking a lot from a young, manager when experienced options were available. Ultimately, Premier League survival wasn’t achieved. Huddersfield were relegated with Siewert only managing one win. 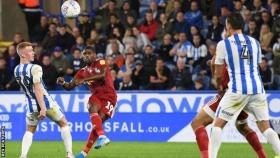 Summer recruitment prepared for Huddersfield's return to the Championship. As you'd expect, heavy turnover was the norm. High wages were cut or moved off the books. New arrivals complemented the January additions. Youth players became a focus with _20-year-old_ Lewis O'Brien promoted to the squad.

The team's form set off alarms. After failing to win their first three matches, Siewert was removed.

His sacking begs the question: why change three games into a new season?

Managing in a competitive league that typically doesn't settle until at least  15 games into the season demands patience. Results have been poor but new players need time to develop consistency in a new system.

Unhappy fans influenced the board. They've experienced a miserable campaign and want success now. But that is easier said than done regardless of the remaining talent, such as Karlan Grant and Alex Pritchard. Winning against Derby to start the season would have created the desired buzz around the stadium. But the board can't give in to every tantrum supporters throw. Proper custodians must be as firm and steadfast as good parents.

At least the international break comes at a perfect time for the club to make a managerial decision. Former player and interim coach Mark Hudson takes over for games against Cardiff and Reading.

If you're asking me, Hudson is the ideal person to take on the job permanently. He knows the players, is well respected by supporters and knows exactly what the team needs to do to get results.

Personal opinions aside, whoever gets the job must get the quality out of the players.

Harry grew up in Derby and supports his boyhood club Derby County. He recently witnessed his side lose at Wembley to Aston Villa in the Play Off final back in May. He has started to grow accustomed to big game defeats (QPR in 2013). But he remains optimistic that his side will get back to the big time (where they belong as they say) with Cocu at the helm and equal their sought after record of having the lowest points tally in the prem!

As well as supporting the Rams, he likes to take a gander at the rest of English football and the big European Leagues.