In this film, Graham Hunter, a Spanish football expert, takes us on a short hop back in time to a decade ago in Catalonia. Lionel Messi, Gerard Pique and Sergio Busquets were fresh faces in the Barcelona team with Carles Puyol, Thierry Henry, Samuel Eto’o, Xavi Hernandez and Andres Iniesta playing the more experienced roles. This Barcelona side was, of course, led by Pep Guardiola, who even had hair then, alongside his now deceased assistant, Tito Villanova. This isn’t Hunter’s first rodeo and he has already told this story before in his outstanding book, “Barca: The making of the Greatest Team in the World” but to see it on the big screen and hear the insight of those involved takes it to a new level.

The film is one of those where it starts with the ending. This is fine though, as the majority of those watching will already know about Barcelona’s Champions League success in 2011. Similar to Titanic, the movie isn’t about the finish that we all know, but a story about the characters involved and how it reached the climax. Similarly to a book, Hunter has split the film into six sections, almost like chapters and the opening is about that famous night at Wembley in May 2011 when Barcelona essentially completed football.

While the opening chapter is about something we all know there’s some excellent insight from Michael Carrick, who played for Manchester United that night, speaking of how good Barcelona was and his admiration for how patient their forwards were. Also, Xavi explains one of the goals from the final, not on a tactics board, but with cups, glasses, plates and beer mats.

While the story is generally a happy one, especially if you are a fan of the Blaugrana, it’s not without its emotional moments as the second part features the run-up to that Champions League final, including a look at Eric Abidal’s illness. The Frenchman had been diagnosed with a tumour on his liver and had to undergo surgery just two months before the final at Wembley. Abidal made a miraculous comeback and eventually lifted the trophy when the captain, Puyol passed the honour on to him. Seeing the emotion as Abidal pumps the trophy in the air whilst screaming Vamos would bring a tear to the eye of even the bitterest of Real Madrid fans.

A style and standard of play like that achieved by Barcelona in 2011 doesn’t just happen overnight. There are nods to the late, Johan Cruyff, who alongside Pep Guardiola, are seen as the architects. Cruyff laid the foundations as a manager when he brought his ideas and style of play to the club, one of which was a fresh-faced midfielder, who would go on to lead Barca to their greatest ever achievement... The Catalan took his masters work and built on it using mostly players from the famous La Masia academy, which had a lot to do with Cruyff, as the Dutchman had insisted on making all of the youth teams play the same brand of football as the senior side. This was a strategy that he also employed to get effect at Ajax.

Of course, no film about Barcelona would be complete with discussing the outstanding Messi. The Argentine has shown over the last decade-plus that he is one of, and probably, the greatest ever to play the game. All of the players interviewed throughout the film are in awe of the little magician and even Xavi, a serial champion in his own right, can do nothing but shrug his shoulders and shake his head as though mystified at how good Messi is now, and was then. when he was just a child breaking into the Barcelona team. 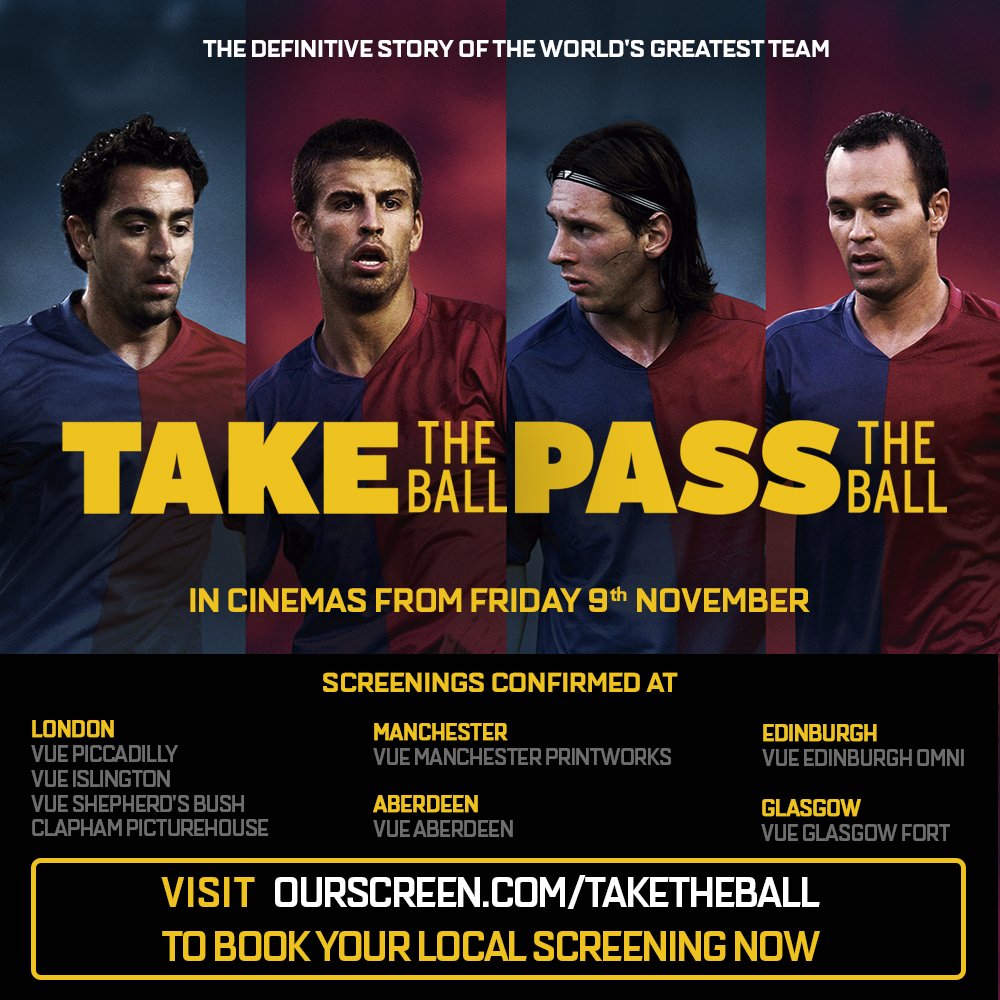 With the past dealt looked back upon, the film finishes by glancing into the future. Dani Alves suggests that Xavi is the third in the series of footballing masters who will return to coach at the highest level after Cruyff and Guardiola; a notion that is supported by Messi, Busquets Jordi Cruyff and Victor Valdes. From how Xavi looks at the game and speaks about it in this film, it’s easy to see why they think he has the attributes to be a great coach, with the film leaving the viewer left wetting their lips at the prospect of Xavi taking over and no doubt enjoying success with the Blaugrana.

Overall, Hunter has done a great job with this story and he clearly had an outstanding cast with anyone who was anyone during this period at the club talking openly about it. Messi, Pique, Xavi, Iniesta, Henry, Valdes, Puyol, Abidal and countless others feature and share their stories about how it all came together. There’s even room for one last surprise in stoppage time, so when you do finally sit down to watch this nostalgic look at one of the best teams ever, make sure you’re not too quick to turn it off when the credits begin to roll at the end.

Take The Ball, Pass The Ball is out now on OurScreen cinemas, and on DVD & Digital Download from 12 November

I am a 33-year-old sports writer from Ireland who enjoys watching European football. My main focus is La Liga, but I do keep a close eye on all of the major leagues throughout the world.

'If you know your history' is a phrase that’s common among the supporters of Everton Football Club. Having that knowledge about days gone by is something that Toffees…

This past summer delivered lasting memories for English football fans. Performing above what many believed possible, England reached the semi-finals of a major competition for…

Leicester City's Fox fanzine was established in 1987. In its time, the periodical compiled an impressive portfolio of interviews. ‘Can’t Buy That Feeling’ brings…