If you’re an average Tom, Dick or Harriet, you may play the lottery and fantasise about doing as you please when you win all that dosh. If you’re also a Manchester United fan, you probably think billionaires shouldn’t do whatever they please with their money.

Now, before you lecture me on leveraged financing and how the Glazers used other people’s money to purchase United, understand that is what all billionaires do. It’s perfectly legal. In fact, you do it as well if you’re a homeowner. The Glazers put 20% down on their Old Trafford deal and mortgaged the rest.

The difference in the loans is 20% is nearly everything you have whereas it’s pocket change for a billionaire. Regardless, the point of becoming obscenely rich is the freedom involved and the way to preserve that freedom is to minimise your risk. So, you look for money-making ventures, invest enough to control the company and allow other people to shoulder the debt. At the point of purchase, that’s the financiers. When it comes time to service the debt, it’s the paying customer.

Again, normal business practice. Vilifying it is wasted time, mostly because the other difference between a billionaire investor and the average football fan is one group is cold and rational.  They can walk away [or not] anytime they choose only to be replaced by like-minded investors while the fan is too emotionally tied to the club to think matters through.

Which brings us to Sir Jim Ratcliffe, England’s wealthiest person. His holdings tally up to just over £21 billion. He made his fortune with petrochemical giant INEOS before looking to entertain himself with sporting investments. Environmentalists hate him as much as United supporters revile the Glazers because INEOS holds fracking rights in Yorkshire. He founded the company in 1998 but sold off a third to investors to fund its growth.

His initial foray into athletics was cycling’s Team Sky. Protestors viewed that purchase as an attempt to 'greenwash' his drilling methods but he followed up by acquiring Swiss club FC Lausanne-Sport [perhaps to 'launder' his money]. Now he is in line to purchase Ligue 1 outfit OGC Nice for €100 million. Sorry, I have no global warming joke for that.

Ratcliffe describes himself as a "tortured United fan" after growing up in Oldham following the Red Devils. These days, he lives in Monaco but owns a box at Stamford Bridge. That he's left his childhood behind is a fact ignored by #GlazersOut practitioners who hold him up as a prospective buyer for their club.

If we're being honest, he did tell reporters he enquired about purchasing both the Red Devils and Blues. Liam Twomey reported for ESPNFC that Chelsea closed the door on Sir Jim’s enquiry before an offer was made. TalkSport claim Ratcliffe was put off by the Glazers’ asking price for United. The Mirror echoed that, adding he "did not see any value in the deal". 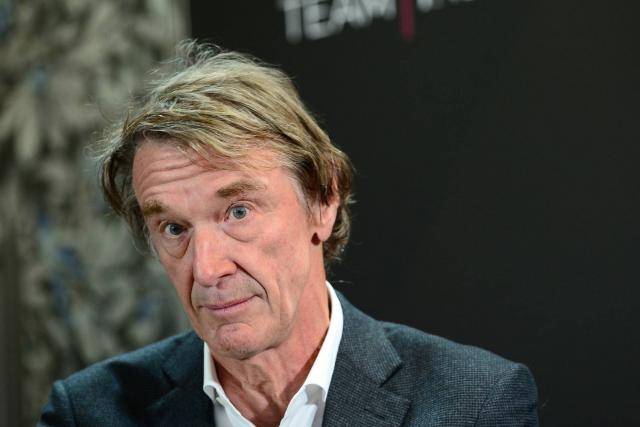 It shouldn’t be a surprise that owners attach the equivalent of a release clause on the entire club. If they’re interested in selling, it’s a starting point for negotiations. If they aren’t, the figure can frighten off interested parties like the €1 billion tag Real Madrid set on Cristiano Ronaldo. Finally, when CR7 decided he wanted to move, that discouraging amount made €100 million for a 33-year-old seem like a bargain to Juventus.

While it’s coincidental that the Old Lady paid as much for one player as Ratcliffe will for an entire club, it does make a point about value. Forbes recently rated United at £4.8 billion in their entirety. Transfermarkt values the squad at €801 million. They set Patrick Vieira’s Nice roster at €155 million. If you compare the respective players' valuations to their clubs’, Nice is a much smaller but more appealing investment. Commercially, United are more marketable. Competitively, Nice holds more room for growth.

The French side finished seventh in Ligue 1. The squad is lean, the manager more proven and the potential to challenge Lyon, Marseille and Paris Saint-Germain far more promising than United’s current prospects simply because the club is run much more efficiently. No one is saying Les Aglions will ever be a global cash cow like United. That goes deeper than the lack of competition and quality in Ligue 1. The root of the problem is that Gallic football fans view the game as simply an entertainment rather than lifeblood without which they cannot survive. English fans often struggle to understand the French. Turns out it’s not the accent; it’s their rationality.

Meanwhile, United finished sixth in the Premier League while supporters gathered their rage to mobilise #GlazersOut. If Ratcliffe met the Americans’ price, he’d then face decisions whether to keep on a CEO with exemplary marketing skills but debatable football nous in Ed Woodward, a manager with limited experience in Ole Gunnar Solskjaer and several players with heavy contracts to go with heavier legs in Chris Smalling, Phil Jones, Ashley Young and Juan Mata. As romantic as it may have initially sounded to that “tortured United fan”, fixing the club on the pitch simply wasn’t worth the cost despite the enormous marketing benefits.

That's the anatomy of a business decision trumping a boyhood dream. Ratcliffe wants to own football clubs and enjoy the game but first and foremost, he’s a billionaire. Like the fan and Manchester United, he isn’t going to walk away from his money. Neither will most other prospective buyers at this juncture.

The one thing Manchester United's Yank owners know about the football side of the business is how to set a release clause. Like Real Madrid with Ronaldo, they realise what they have and they’ve dug in like tics. Unfortunately, that doesn’t bode well for the #GlazersOut crowd.