Manchester City have enjoyed anything but an inauspicious start to their Premier League title defence. They’re unbeaten and should’ve been leading the table; but for a VAR intervention against Tottenham Hotspur.

However, their smooth sailing hit its first tide not in defeat, but an ugly injury. Aymeric Laporte, unfortunately, injured himself against Brighton & Hove Albion. If not anything, the Basque is perhaps Pep’s most trusted defensive asset. Considering he topped their centre-back stats last season, there’s little doubting why.

Nevertheless, City must continue without their most reliable centre-back. It’s almost a three to four-month-long recovery period for Laporte (unless the Barcelona magic doctor works wonders yet again). With the next transfer window in January, Guardiola must do with what he has. The options, although there are a few, aren’t as glittering as those in midfield or attack...

When narrowing down the possibilities, Nicolas Otamendi and John Stones rise up as meagre contenders. They’re not the safest defenders to rely upon. The Argentine is perhaps too eager to win possession for his own good. By putting in overzealous challenges, reckless tackles or being goaded into losing position, he often compromises the Citizens’ compact shape in defence.

Stones, for all his improvement under Guardiola, still suffers from the timely lapses in concentration. Despite receiving a heroic moment with his goal-saving challenge in the virtual title-deicer against Liverpool, he’s yet to establish himself as a regular.  Now with Laporte out, they both have the opportunity to win over their manager’s confidence.

The former Everton man has only started one game so far, but now gets his chance to consolidate a starting spot indefinitely. There’s little doubting his distributing ability, having made the third-highest passes for a City defender last season by averaging 72 passes per game! Moreover, by averaging more than 2 clearances, nearly four recoveries and aerial duels won per 90 last season, he looked polished with his defensive contribution.

That being said, to excel at Pep’s extra-high level, Stones must improve his game-reading skills. He often misinterprets attacking moves, exposing his defensive line for attackers to thread through. He’s getting better, but this is the 25-year-old’s time to achieve and unlock his utmost potential. To expel his errors, he must be more level-headed with his movement as well as improving upon the timing of his challenges. 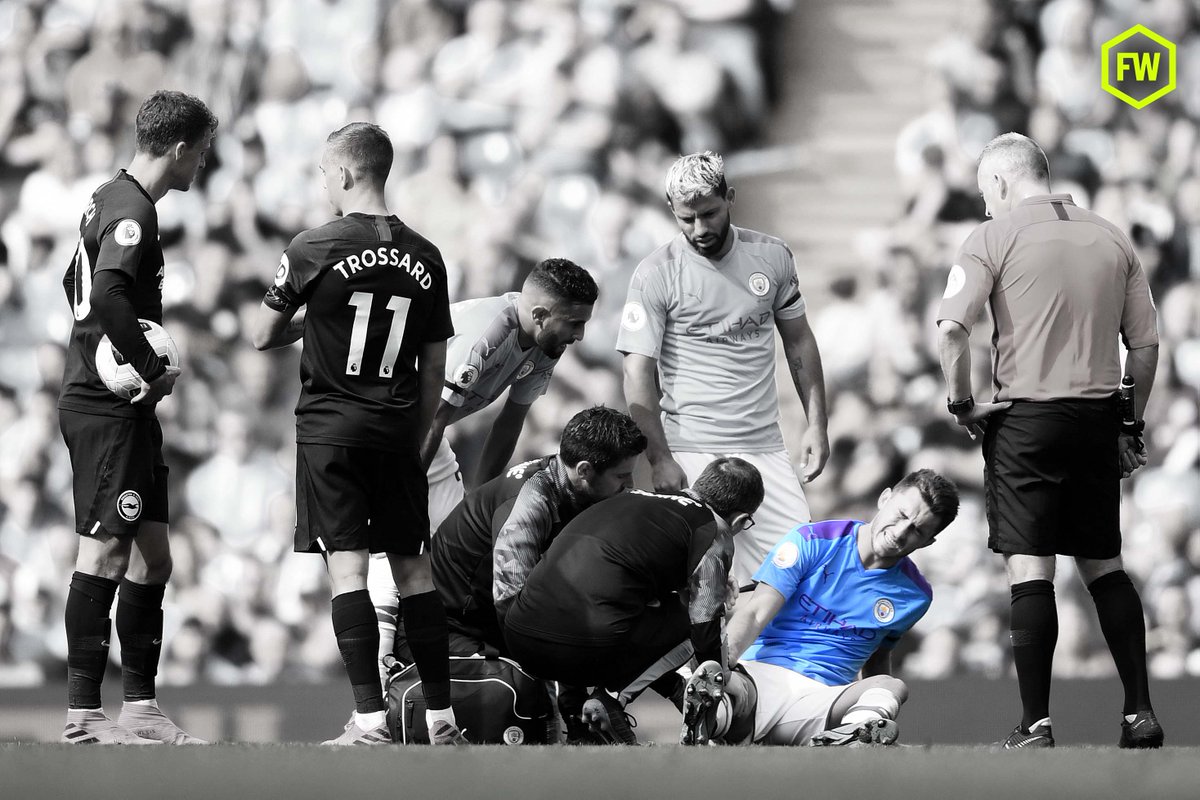 Since signing for them in January 2018, no Premier League player has made more forward passes than the Frenchman (1498) 🔥

Otamendi also must tone down his aggressiveness for his own good. Now the senior-most defensive figure at the Citizens following Vincent Kompany’s farewell, he must act like one. Despite his tendencies to unnecessarily lunge into challenges, the Argentine’s a strong lad with especially powerful aerial ability.

The fact that he averaged two aerial battles won, three clearances and nearly four defensive recoveries per ninety last campaign prove his dominative figure. As long as he expels his brain malfunctions, along with toning down the eccentricity, Otamendi should work as their reliable backline general.

Yet, certain issues can’t be autotuned into fixation. Even Guardiola knows that. While options are limited, the versatility of squad players help his case. Kyle Walker operated briskly as a centre-back in Gareth Southgate’s side during the World Cup. As long as there’s little aerial threat (like Burnley), he could do a job as a make-shift centre-back with his pace along with defensive solidity.

This allows Joao Cancelo to slot into the right-back role. The Portuguese is not just lively going forward with his crosses along with his eye for goal, but is an expert defender following grinding it out in Serie A. Moreover, after the way Oleksandr Zinchenko has grown in recent months, perhaps another youth promotion is granted.

Joel Latibeaudiere, the rising academy product remains an option. He travelled with City in pre-season, becoming synchronised with Guardiola’s style. Against 'weaker' opposition, giving him exposure could help his evolution. Although, trusting Fernandinho as a centre-half is risky. He’s too rash, struggles against mobile strikers and is cuts a shaky figure against mobile attackers.

Of course, Pep will bank on Rodri to protect his backline in times of distress. The new signing’s already working like he’s been here for ages. However, Laporte’s unfortunate injury serves as a golden opportunity for Otamendi and Stones to fight for a permanent starting spot. Only the strongest survive in Guardiola’s side. Whether any of these two can pounce on it remains to be seen...