Background image belongs to the author.

The Women’s Super League showpiece opener between Manchester City and Manchester United was my first live experience of a ladies football match.

Like many others, I had watched the summer’s World Cup in France from the comfort of my sofa with curiosity.

The enjoyment it brought came as something of a surprise to me but the more I consider this, the more idiotic it seems. I am a football fan and the World Cup was just another tournament to enjoy.

A little over two months since England’s semi-final defeat to the United States, I found myself at the Etihad for the Manchester Derby alongside over 31,000 others.

I had hopped onto a bandwagon which is gathering momentum.

The previous night I had been to an event at the Football Writer’s Festival at Manchester’s National Football Museum. Suzy Wrack, Carrie Dunn and Kieran Theivam, three of the leading voices in women’s football, talked at length about the World Cup, Phil Neville and the game's future. One of the main discussion points was whether more WSL matches should be played at the men’s grounds.

Is it better to fill a smaller stadium, many of which are outside the catchment areas of the clubs they host, or play at a bigger ground in front of sparsely populated stands?

There are arguments for both. It wasn’t an issue on Saturday afternoon as a WSL record crowd took their Etihad seats for the Manchester Derby.

At only £7 per ticket the opportunity to see a host of internationals, including England captain Steph Houghton, was too good to turn down.

Numbers were boosted by the Premier League's adjournment for an international break. Even so, the atmosphere outside the stadium leading up to kick-off was palpable.

On Sunday, Chelsea hosted Tottenham Hotspur and gave away 40,000 tickets free of charge. This PR move was also up for debate at the Football Writer’s Festival. Theivam deemed the decision well-intended but ultimately misguided, saying it arguably devalued the women's game.

The official attendance at Stamford Bridge as Chelsea ran out 1-0 winners was 24,564, around 6000 fewer than those who paid to watch the Manchester Derby.

At the Etihad there were problems. Many fans had bought tickets online using the print-at-home function but a glitch in the system meant hundreds turned up without their tickets and were forced to queue.

That, coupled with the fact supporters, myself being one, wanted to pay on the gate meant many didn’t get into the game until long after kick-off.

Near where I was sat a family arrived on the 42nd-minute mark grumbling about the backlog. 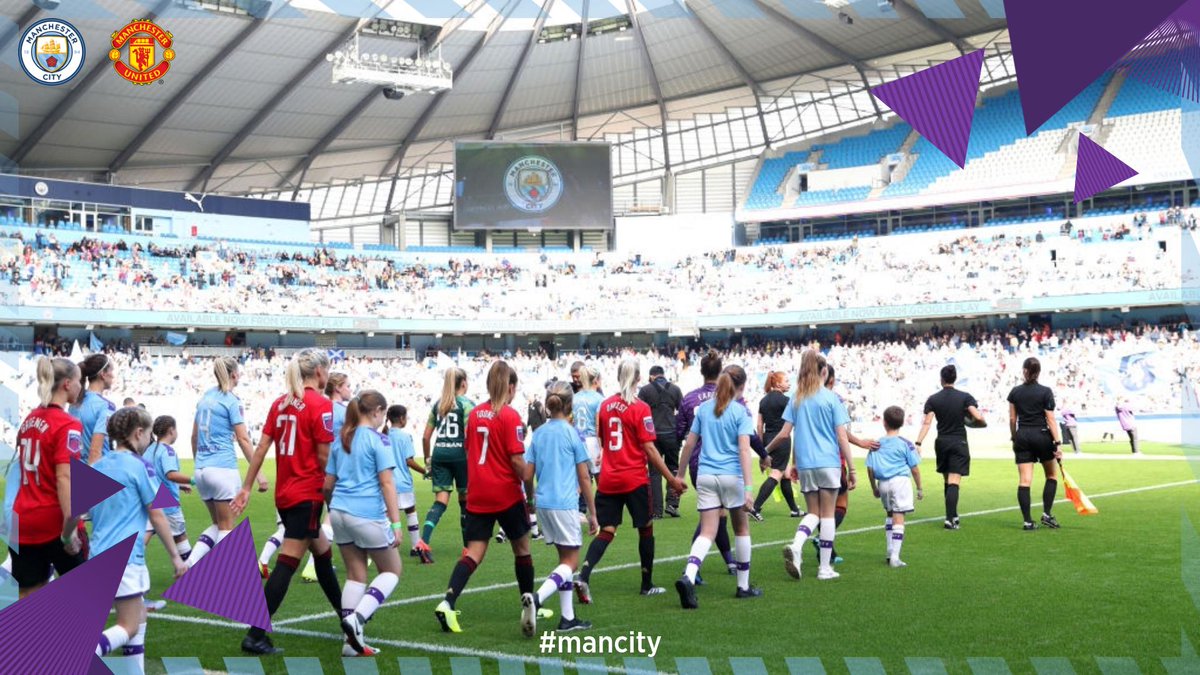 Man City Women
ManCityWomen
Follow
Over 31,000 of you here at the Etihad today.

The match itself was not a classic. Manchester City, a side which went unbeaten last season but missed out on the title to Arsenal, were firm favourites yet it was their rivals which looked most likely to score in the first half. Manchester United would have done had it not been for a fantastic point-blank save from teenage goalkeeper Ellie Roebuck.

The game was decided just after the interval by a goal which many fans missed while still queuing for their half-time refreshments. Scotland international Caroline Weir, the best player on the park by some margin, swung her left foot and watched as the ball flew into the top corner, far beyond the reach of United keeper Mary Earps.

City dominated from then on. They relaxed after their nervous first half, passing in the kind of neat triangles that Pep Guardiola would have enjoyed.

The afternoon's biggest cheer came when the attendance was announced. You got the impression everybody there felt as if they were part of a momentous moment for the women’s game, that their presence was helping take it to the next level.

They were right. The WSL's previous record attendance of 5,265 was obliterated. The 31,213 at the Etihad is tangible evidence of the World Cup's impact and the overall sense of excitement surrounding the women’s game.

Attendances will drop when City return to the Academy Stadium and Chelsea to Kingsmeadow, that is unavoidable. However, there's hope the enthusiasm will linger beyond the opening day, meaning demand for tickets will be such that more games will have to be played at the men’s grounds.

The FA, which refused to move West Ham United's Premier League game against Southampton toward last season's end to accommodate fans who wanted to watch the women’s team in the FA Cup final, is now at an impasse.

The organisation's efforts to promote the women’s game and assign it equal importance to the men’s will be scrutinised more than ever after this record-breaking weekend.

Whether or not the FA chooses the right side of history remains to be seen.

I thoroughly enjoyed my first live experience of women’s football. There are many differences when comparing it to a men's game. The main contrast is how pleasant the atmosphere is.

This may have been a Manchester Derby but there was none of the vitriolic, over-the-top tribalism and no sense animosities between the two sets of fans would manifest and overshadow events on the pitch.

In many ways, the women’s game is a purer footballing event, less about the narrative built up in the weeks leading to the match and more about the 90-minute contest itself.

And after all, that is what we pay our money to see.

What can Manchester United women expect in the WSL?
By Warren Smith

Fourteen years ago, Manchester United as a corporation decided that women’s football was not profitable. They disbanded the team to avoid taking a loss. Over time, attitudes…