Why are Senegal fans so mean to Sadio Mane?

When the referee sounded the final whistle in the African Nations Cup Qualifier between Equatorial Guinea and Senegal on Saturday, Sadio Mane immediately let go of some pent-up emotions. The Liverpool winger fell to the ground and sobbed uncontrollably.

When a full-grown adult cries, the problem is often emotional rather than physical. Mane’s situation wasn’t different. He was repeatedly insulted and booed through the game. It wasn’t the Equatorial Guinea fans, the boos were coming from the away section – his own people.

The game that broke him

Criticism for Mane has been rife in Senegal over the past year. Senegalese fans have increasingly become frustrated witnessing him shine weekly for Liverpool but fluff his lines on the international stage.

Senegal supporters juxtaposed Sadio Mane with club teammate Mohamed Salah. He's coming up short by a fair distance. Whereas Salah has consistently scored vital goals for Egypt  – netting 12 times in 17 appearances between 2017 and 18 - Mane has only managed a paltry five strikes in 19 outings during the same period.

Media outlets in Dakar and the environs haven’t stopped critiquing Mane each time he donned for the Teranga Lions. Although he kept receiving plaudits in Europe, many fans at home remained sceptical about his commitment to Senegal.

Mane must’ve been disappointed with how those Senegalese supporters treated him. But he never reacted to it in any way. The Teranga Lions haven't been doing badly with him leading from the front. In the past one-and-half years they’ve qualified for two major tournaments, including the World Cup. 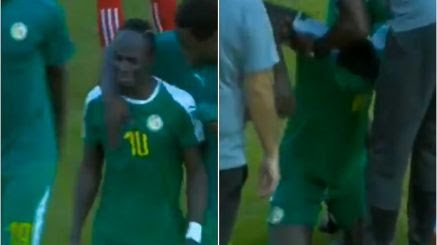 Before the game against Equatorial Guinea, Senegal had already secured their spot at AFCON 2019. The contest was ultimately a dead rubber. Mane could’ve used that as an excuse to avoid flying thousands of miles to represent his country. Remember, Liverpool play three games in eight days after the international break. Their Senegalese winger will likely be heavily involved. But no sooner had coach Aliou Cisse made the call and he was on a plane.

The encounter's first half was uneventful. Both Senegal and Equatorial Guinea approached the game with the laxity it called for. In the second half, Mane missed a clear-cut chance to open the scoring. That was when Senegalese fans turned on him, booing every time he touched the ball. Cisse allowed it to continue by leaving the forward on for the full 90 minutes.

What happened at the end is well known. Reports say Mane fell on the ground twice, crying, and then had to be helped off the pitch.

Is Mane competing with Salah?

There’s a school of thought that believes Mane’s reaction can be ascribed to him slipping further behind Mo Salah in the race for the African Footballer of the Year Award. Such couldn't be further from the truth.

Mane is perhaps trying to match or better Salah's goal-scoring stats. Also true, he might've become stingy by doing so. There's nothing wrong in aiming higher than the next guy, as long as it doesn’t hurt the team. But crying uncontrollably after failing to score against Equatorial Guinea in a meaningless encounter. That doesn't seem plausible.

Mane doesn’t get the support he deserves from his nation's fans because he doesn’t score for Senegal enough. Judging players' international performance on their club form is a phenomenon that’ll never end as long as football exists. Supporters, pundits and the like won't ever get it right in that regard.

Mane is only 26 years old. He still has a long career ahead. However, if he keeps receiving the same hostile treatment from Senegal supporters, it’s Liverpool fans who’ll continue to reap his rewards.