By Mark Dannell
Aubameyang Bundesliga Dortmund European Football Germany Hoffenheim Match Reports Nagelsmann Schalke 04
An intriguing week in Gameweek 10 as Bayern are caught at the top, our Bundesliga expert Mark Dannell even got more than half his tips correct!

Hertha Berlin
HerthaBSC_EN
Follow
GOOAALLLL FOR HERTHA!!! He's only gone and got his hat-trick! Kalou finishes the game. 3-0 #BSCBMG #hahohe
Follow
21:15 PM - 4th Nov 16
8
13
Fair to say that when you have been rotten on the road then having your best defensive midfielder sent off before half-time would not be your preferred way to go about business. Christoph Kramer earned himself an early bath for two yellow cards five minutes before half-time but it was already game up by that point as two goals from the returning Salomon Kalou had put Hertha in the driving seat.

Further worry came in the shape of an injury to Patrick Hermann for beleaguered boss Andre Schubert who faces the derby against Köln in two weeks time without two of his best players.

Hertha march on in pursuit of those Champions League spots, another goal shortly before the end for Kalou sealed a deserved hat-trick and three welcome points for the capital club.

A fantastic point for Hoffenheim and perhaps it really is time to start taking them very seriously. Demirbay gave them the lead in the 16th minute, not undeservedly so either and it took an unlucky own goal from Zuber to allow Bayern to go into the break level.

As so often the Bavarians found another gear in the 2nd half but they could not find a way through the well-marshalled Hoffenheim defence. Time and again the red waves were thwarted but they still could have won it at the death, Hummels managing to hit the post when it seemed easier to score. What they would have given for.. well just about anyone else to be on the end of that chance!

An entertaining game on Saturday afternoon and not the only one! Five goals, five different scorers and action right up until the final moments.

Leverkusen came out of the traps fast, no doubt buzzing from their Champions League win over a lethargic Tottenham on Wednesday night. A great save from Esser denied Hernandez just before the half hour mark but just a few minutes later Calhanoglu left the Darmstadt keeper no chance from the edge of the box.

After half-time the game exploded into life, Darmstadt equalized through Colak who had only been on two minutes before Brandt restored the lead. Aranguiz looked to have secured the points with just 20 minutes to go but Darmstadt were not completely done, Gondorf crossed for Vrancic to pull one back. It was not to be though and incredibly that is the first time Darmstadt has lost two Bundesliga games in a row. 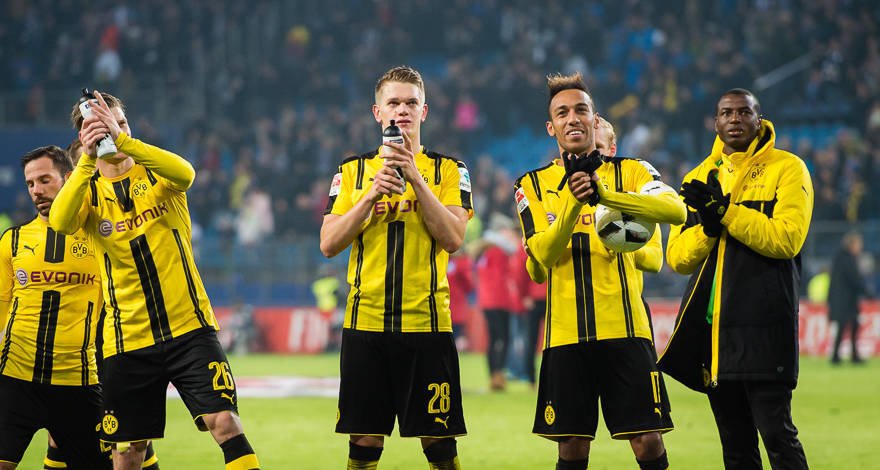 Borussia Dortmund
BVB
Follow
.@Aubameyang7: "I've never scored four goals in a game before“ #hsvbvb https://t.co/XQOqdCbjTJ https://t.co/QQQQCnLqap
Follow
22:19 PM - 5th Nov 16
222
906
Pierre Aubameyang appeared to have a rocket lit under his backside this week with his internal suspension from the Champions League game as he scored an incredible 4 goals and assisted the other for Dembele.  Hamburg were powerless to resist, the hat-trick was sealed before half-time with goals in the 4th, 23rd and 27th minutes. The 4th came just after half-time.

Nicolai Muller did score a consolation brace either side of Dembele's 5th goal but it is hard to see where Hamburg go from here. Changing the coach hasn't worked though of course Gisdol will be given time and they find themselves now five points behind Werder in 16th place. The Hamburg board will no doubt have some more money available but it is hard to see who might want to come to this basket case of a club!

Prediction – Away Win. Spot on

Late heartbreak for Ingolstadt and that is the end of the road for Markus Kauczinski as trainer of FC Ingolstadt. It is no surprise, they are the only strugglers not to have had a change so far and the team look uninspired and to be brutally honest, not good enough. It is hard to be too critical of Kauczinski, the transfer window looked like a disaster and so it has proved.

Dirk Schuster was happy enough as both goals came from substitutes, Bobadilla in the 86th minute with a direct free kick and Altintop secured the points after a pass from Bobadilla. A run of 4 games without a win is broken for Augsburg and they can be relatively happy with 13th place, well clear of danger for now.

Is this where it all starts to go south for Freiburg? After weeks of good performances, this was an unmitigated disaster, lackluster in possession and all over the place at the back. Mario Gomez was able to notch a double either side of half-time and Rodriguez wrapped things up with a penalty after a red card for Christian Günter. Valerian Ismael will get the chance to see if he can build on this, having been confirmed as permanent trainer on Sunday morning.

Just about deserved the win for Frankfurt in a high tempo evening kick-off on Saturday. Keeping Anthony Modeste quiet is no picnic but the Eintracht defence restricted him to pot shots, an excellent display from them.

Gacinovic scored what proved to be the winner as early as the 5th minute, starting the move himself with a precise pass to Chandler and then being able to get on the end of the deflected cross with a thumping header. In the second-half Köln had perhaps the better of the chances, but Osaka contrived to miss from the six yard line, while Chandler produced a goal-saving tackle on Zoller in the final 10 minutes. Köln missed the chance to go temporarily 2nd while with the win Frankfurt draw level on points in the race for the Europa spots. 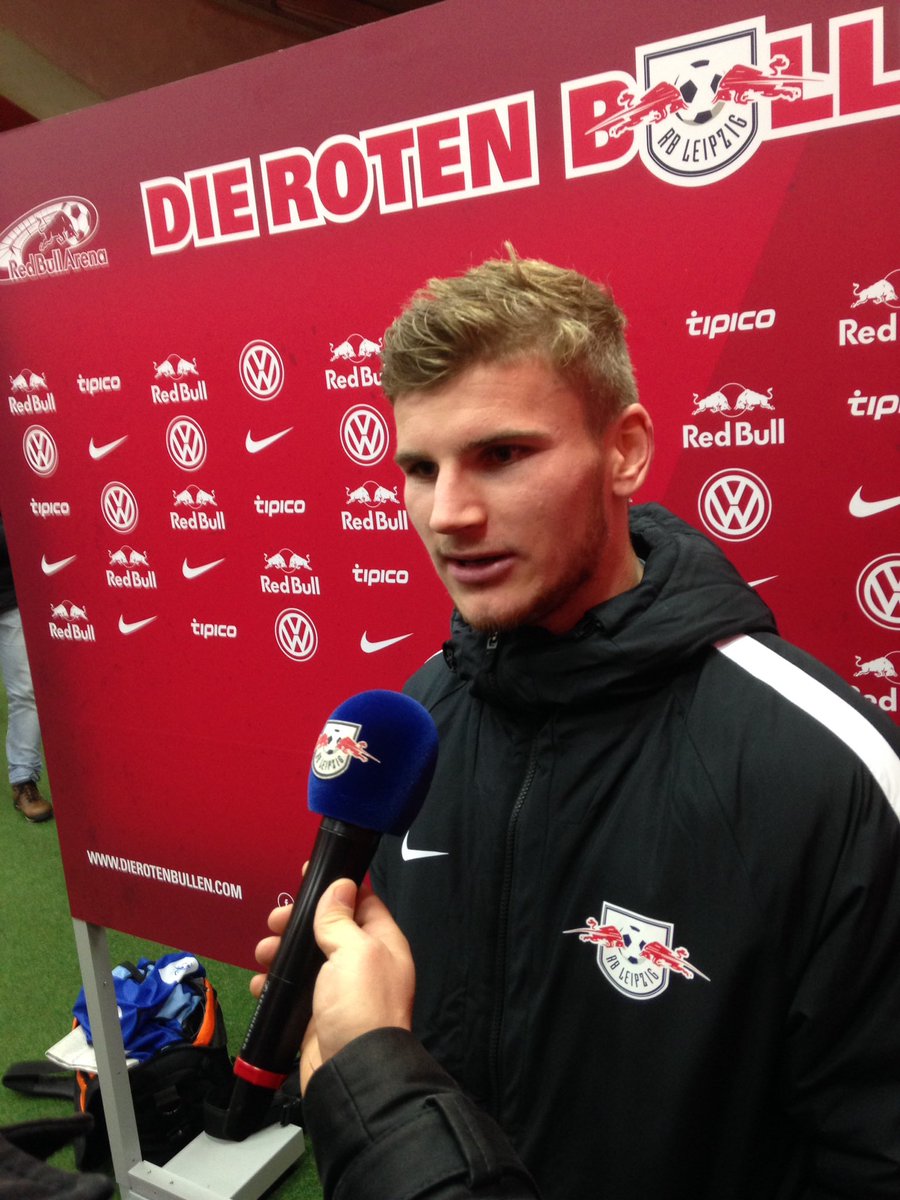 RB Leipzig English
RBLeipzig_EN
Follow
Timo #Werner: "@EmilForsberg1 provided great assists for the goals. Despite our 3-0 lead at half-time, it was a difficult match!" #RBLM05 https://t.co/1XpBw3doUD
Follow
16:52 PM - 6th Nov 16
4
7
It was the Werner and Forsberg show as 2 goals and an assist for the striker and 1 goal and 2 assists for the midfielder put the East Germans 3:0 up at the break. With maybe an eye on next week at Leverkusen they noticeably eased off after the break, though Forsberg really should have scored a 4th.

Mainz looked thoroughly demotivated after their Europa league hammering at Anderlecht and a consolation from Stefan Bell was all they had to show from a slightly better 2nd half display.

9 games in all competitions unbeaten, Europa League progress secured with 2 games to go, credit has to go to Markus Weinzerl and his men for a real turn around from the nightmare start.

The Royal Blues had to be patient on Sunday evening, despite their good play it took until the 35th minute to take the lead with Alessandro Schöpf notching the first of his double. It was an eventful game for the Schalke youngster, after Bentaleb had doubled the lead Schöpf then felled Gnabry for a penalty which he dispatched himself.

In the 2nd half Schalke went for the jugular and it was no surprise to see Schöpf pop up to score his 2nd and secure the points. 3 wins and 2 draws has them comfortably mid table now and looking forwards not backwards.