The Bundesliga wrap up - Stalemate in the Revierderby 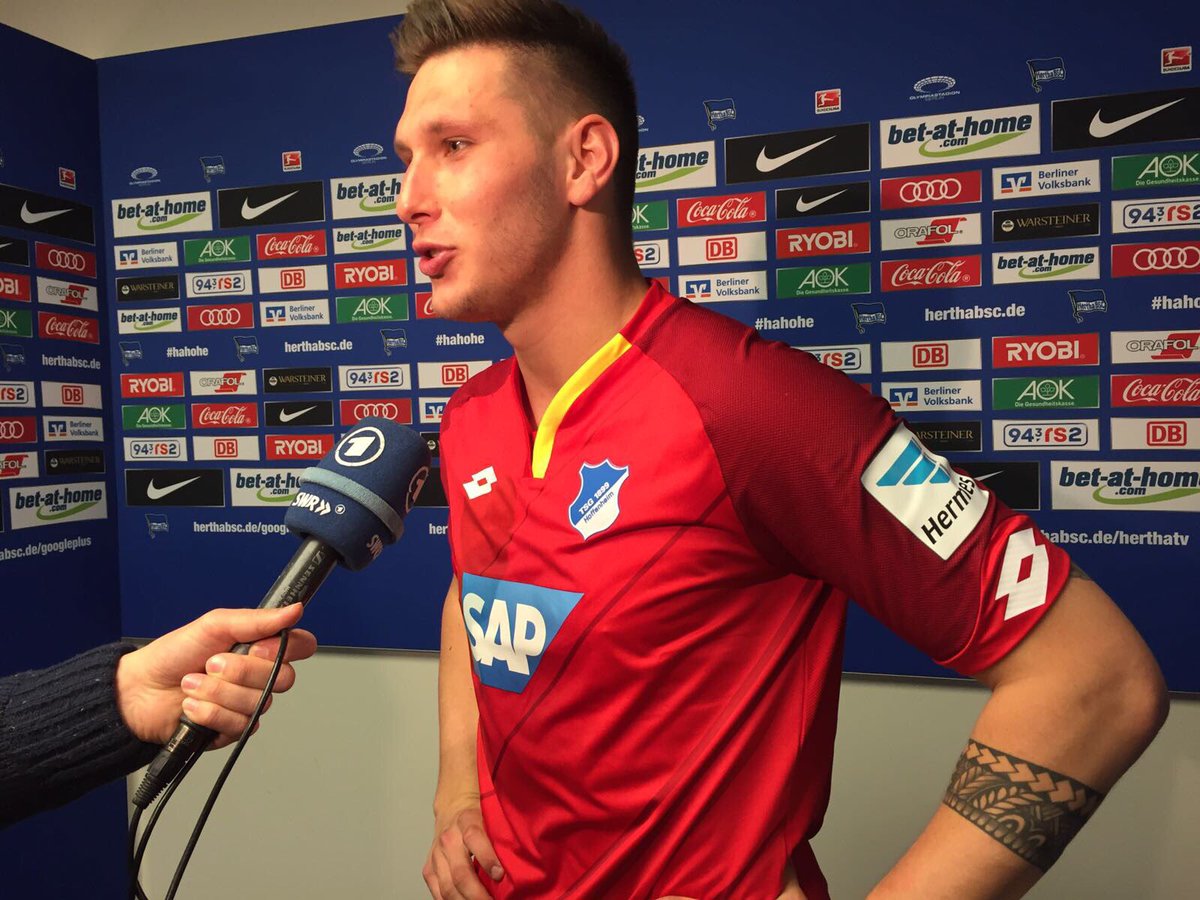 TSG Hoffenheim EN
achtzehn99_en
Follow
Niklas #Süle: "This win is extremely important. I am glad I was able to score such a goal tonight." #BSCTSG #tsg https://t.co/LyRXE0yJJL
Follow
22:01 PM - 31st Mar 17
4
19
A really impressive win for Hoffenheim surely cements their place in the top- 4. The key to the victory was equalising quickly after falling behind in the first half. Hoffenheim had started well, Mittelstädt cleared off the line as early as the 10th minute. Hertha had a good chance not long after before Pekarik took advantage of a miskick from his teammate and netted.

Hoffenheim were able to equalise before half-time, Kramaric scored his 9th of the season from the penalty spot. Once into the 2nd half, they stepped on the gas, helped by the sending off of Mittelstädt. Kramaric contrived to hit the post twice, Demirbay managed it once before centre-back Niklas Süle showed them how to do it. An unstoppable effort from nearing 30 yards. Kramaric added his 10th of the season late on to add gloss to the scoreline.

As predicted, Bayern appeared to be playing a training game. Lewandowski netted a hat-trick and laid on 2 goals for Thomas Müller in an outstanding display. Thiago added the other goal plus a lovely assist for Lewandowski to open the scoring.

Augsburg were horrific and if this keeps up they are going down. The game in midweek against Ingolstadt is now season defining. 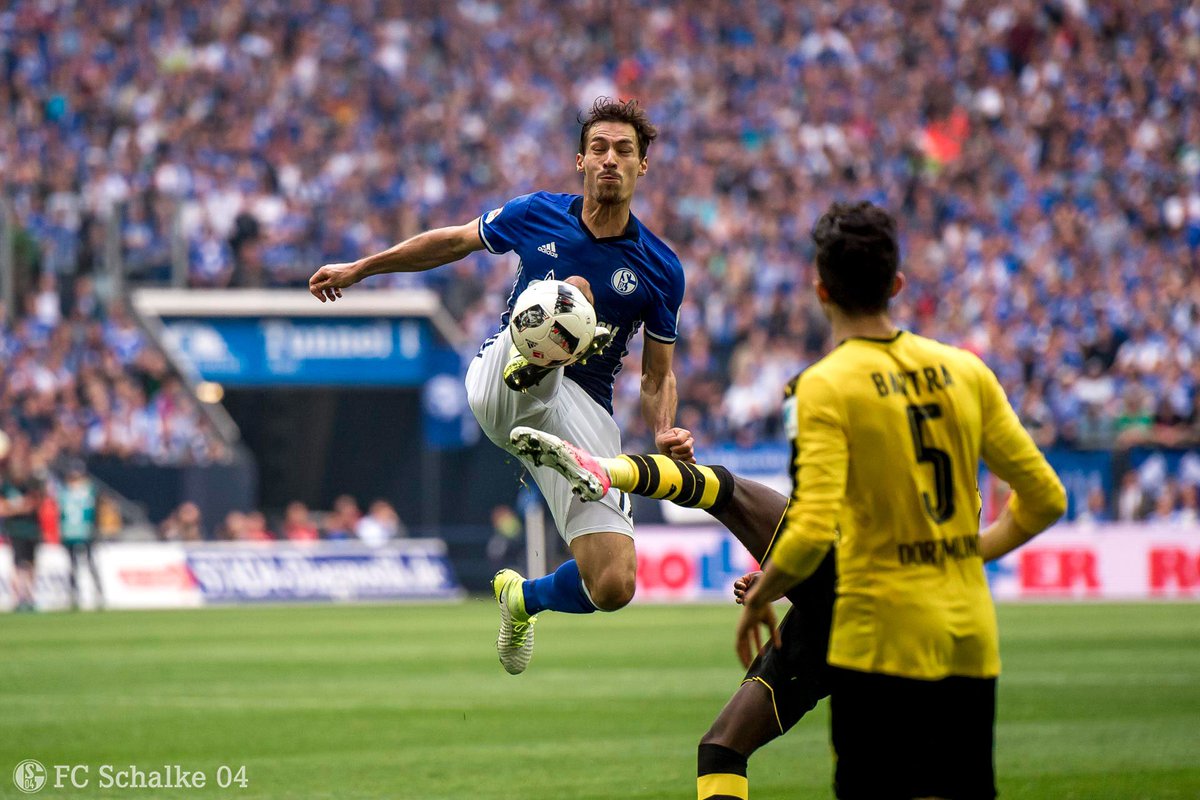 FC Schalke 04
s04_en
Follow
Just 0️⃣4️⃣ of the best Royal Blue 📸 from Saturday's derby #S04BVB #s04 https://t.co/W3D7W9RxIA
Follow
10:03 AM - 2nd Apr 17
13
52
The RevierdDerby lacked nothing for intensity as usual. Both sides went at it from the off but it was Dortmund who dominated and they will be bitterly frustrated not to have won. Dembele was a constant threat throughout and had 2 decent chances in the first half.

Into the second, Burgstaller could arguably have had a penalty for a tug by Bartra. To add insult to injury, Dortmund went straight up the other end and opened the scoring, Dembele played through Kagawa who squared for Aubameyang to open the scoring. Dortmund then passed up a number of opportunities, most notably when Aubameyang tried to square for the onrushing Dembele, a poor pass was cleared by Höwedes though. Dembele later struck the post before Kehrer celebrated his first appearance in this fixture by slamming a shot past Bürki for the equaliser.

A dramatic last minute winner by Lewis Holtby took Hamburg to the brink of safety. It was nothing less than they deserved, a step faster than Köln all game who were somewhat disappointing. Nikolai Müller opened the scoring with 15 minutes gone after good work by Wood. In a good spell around the half hour mark, Jojic equalised for Köln and Modeste had a good chance to take the lead.

For the rest of the game, a collection of half chances and long shots were the name of the game before Holtby latched on to a loose ball after 2 good saves from Horn and slammed home his first goal of the season in added time.

Quite a game this one! Wolfgang Stark refereed his 300th Bundesliga game and celebrated it by giving an “assist” for Werder! More on that soon. Both sides certainly went for the win in this one, Werder have now taken 16 points from the last 18 and yet still find themselves in danger of relegation!

Max Kruse hammered in an unbelievable strike to get the ball rolling in the 21st minute and Thomas Delaney added the first of what would prove to be a hat trick in first half injury time. 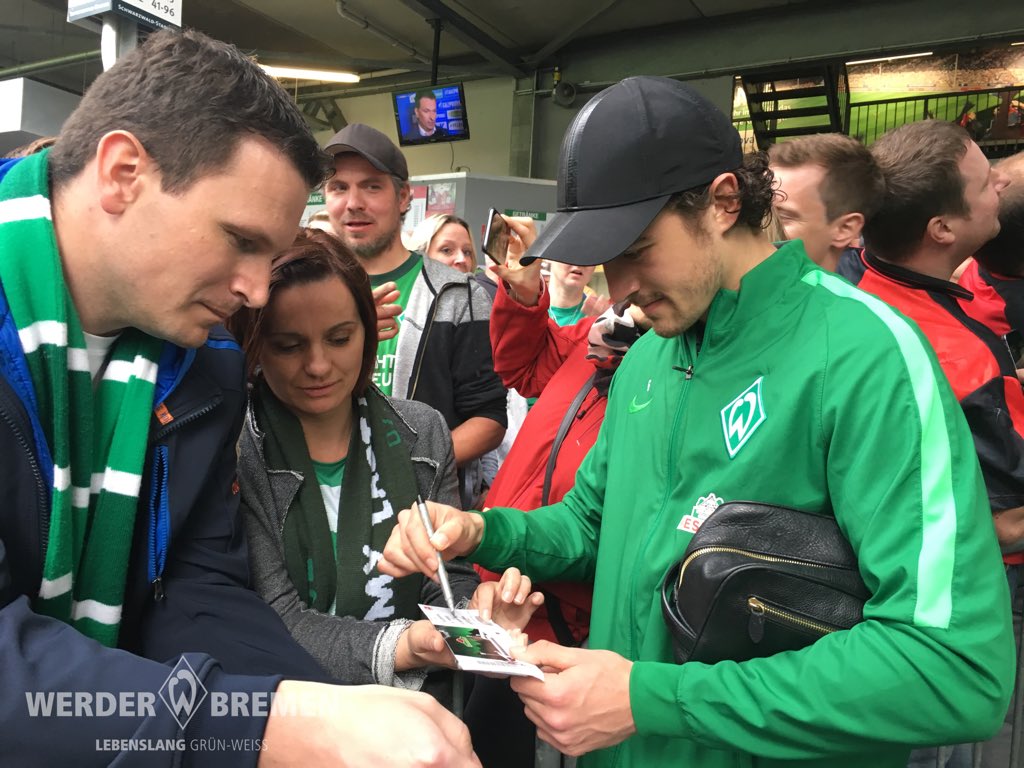 SV Werder Bremen EN
werderbremen_en
Follow
The man of the moment. @delaneydk 👏👏 #werder #scfsvw https://t.co/wEpMcdw8wV
Follow
17:55 PM - 1st Apr 17
7
20
Christian Streich made 3 changes at the break but that seemed to make things worse as Delaney notched his 2nd just 2 minutes into the 2nd half. Petersen pulled one back with a rebound from his own missed penalty but hopes of a comeback were extinguished shortly after. Fin Bartels flicked in a cheeky finish after referee Wolfgang Stark had inadvertently disposed of Freiburg in midfield allowing Werder to break quickly.

There was still time for Freiburg to pull another goal back, Grifo thundered in from the edge of the box. Delaney completed his hat-trick shortly before the end, totally unmarked to nod in after a free kick.

A nice stroll in the park for Leipzig, the returning Naby Keita opened and closed the scoring with Forsberg and Orban adding the others.

Darmstadt was restricted to one decent chance throughout, Sidney Sam firing wide after being played through. 14 points adrift with 8 games to go, it is now a matter of when rather than if.

Frankfurt should have been out of sight by the time Yann Sommer saved Marco Fabian's penalty in the 78th minute. Rebic, Tawatha, Fabian and Hrgota all squandered good opportunities, while BMG were toothless up front throughout. The Cup semi-final between these two sides will be the last meaningful match of the season for one of them now.

Despite the three goals, there was not an awful lot of action on display. It was clear that both are involved in a relegation scrap, however much Mainz might have disputed that before the game.

Ultimately it was Ingolstadt who secured the points, goals from Lezcano and Hadergjonaj enough to cancel out an own goal from Matip. 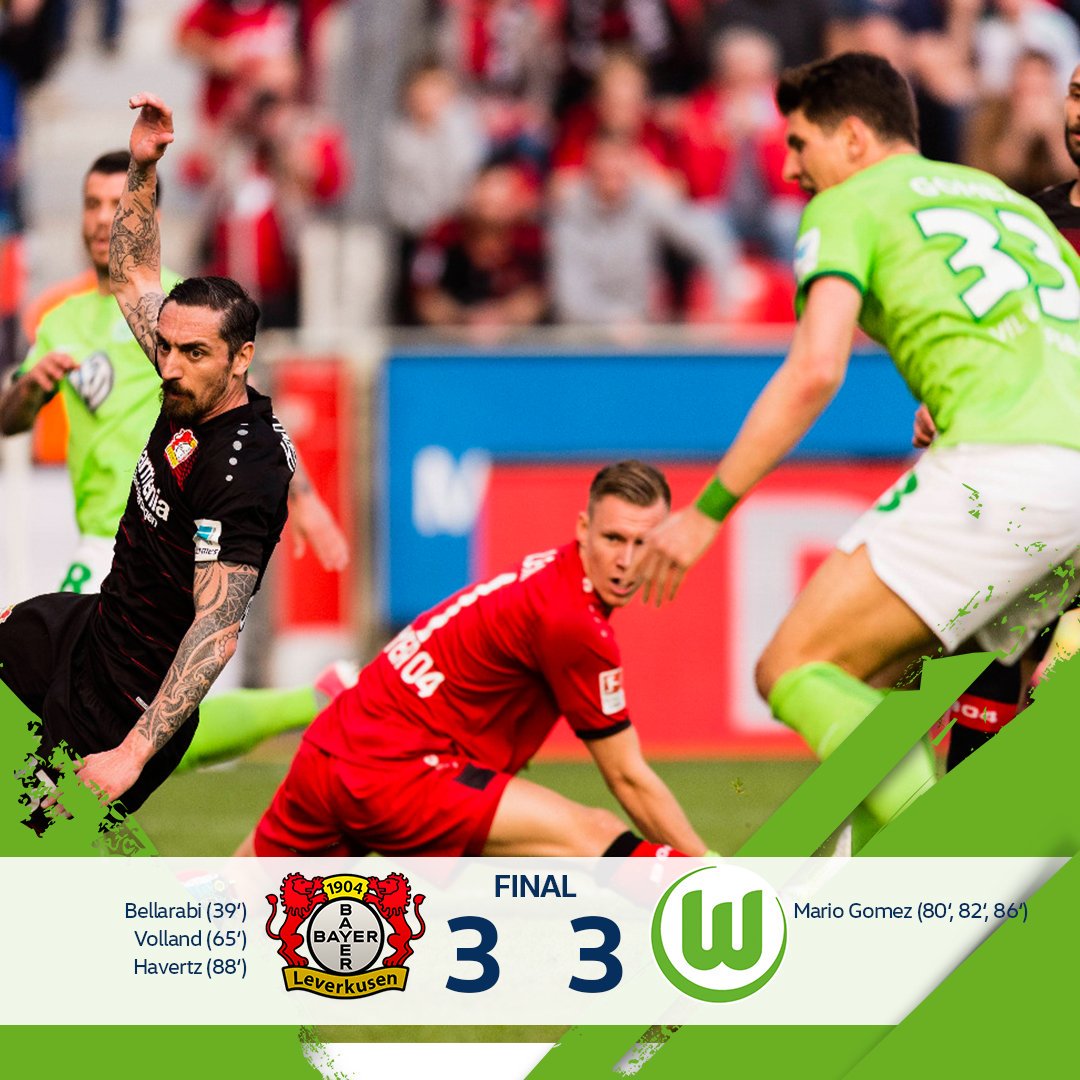 VfL Wolfsburg EN
VfLWolfsburg_EN
Follow
FULL TIME! The #Wolves have to settle for a point despite an incredible second-half fightback. Hard luck, boys! 😩 #B04WOB https://t.co/eOTHA1fjEk
Follow
18:27 PM - 2nd Apr 17
5
15
At 2:0 up moving into the 80th minute Leverkusen would not have expected to need an 88th-minute equaliser. Goals from Bellarabi and Volland were just rewarded for an impressive display up to that point.

They can deny it all they want but it was almost noticeable that Leverkusen switched off at that point. A warning was fired when Gustavo hammered against the bar. The Mario Gomez suddenly turned up. Goals in the 80th, 82nd and a penalty in the 87th minute seemed to have secured a miracle win.

Then it was Wolfsburg's turn to go to sleep, Bellarabi almost from the kick-off played Havertz through and the youngster made no mistake to grab a point. Mental game.