Ruben Loftus-Cheek was called up to the England squad for November’s friendly with the United States and UEFA Nations League clash against Croatia, winning his 10th cap against the former. It’s now 12 months since he made his debut under Gareth Southgate and the 22-year-old has now racked up more games in the last year for England than at Chelsea.

After impressing on loan at Crystal Palace the previous season and shining at the 2018 World Cup over the summer, it was expected that Loftus-Cheek would have an important role to play at Chelsea this campaign. He’s remained on the periphery, however, and may need to leave the Blues permanently to get his career back on track.

Loftus-Cheek finds himself behind Ross Barkley in the pecking order under Maurizio Sarri this term, despite coming off the back of such recent success at club and country level. Before the summer transfer window shut, he had offers to leave from clubs in Germany, France and England but opted to stay and fight for his place – a decision he would later regret.

Sarri has preferred Barkley as the roaming playmaker, Jorginho as the deep-lying midfielder and N’Golo Kante in a box-to-box role. Loftus-Cheek also has the likes of Mateo Kovacic standing in his way of a first-team place. After scoring a hat-trick in October’s Europa League victory over BATE Borisov and netting in the league against Burnley, he found himself an unused substitute in one game and dropped from the matchday squad entirely for the other.

Loftus-Cheek can’t get a run of league games at Chelsea for love nor money.

International career at stake if he stays at Chelsea

Three months into his first season under Sarri has led to Loftus-Cheek making just four starts in all competitions and racking up a meagre 382 minutes of playing time. It’s clear he might have to leave for the sake of first-team football as his Chelsea career has so far amounted to very little. Opportunities for England could also dwindle if he isn’t playing regularly at club level. Barkley is ahead of him in the Chelsea squad and soon will be for England. That should be a wake-up call. 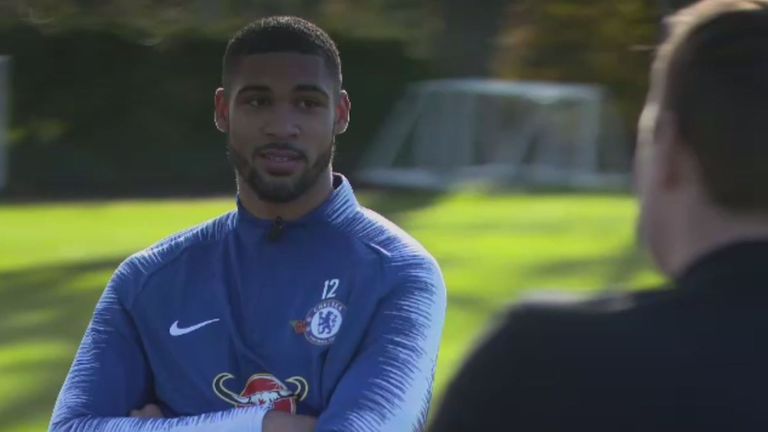 Sky Sports Premier League
SkySportsPL
Follow
Ruben Loftus-Cheek says he understands why there are calls for him to leave Chelsea.

Loftus-Cheek made England’s World Cup squad in Russia as a result of his form at Palace (25 appearances, two goals, five assists). He made four appearances (three starts) over the summer and produced a number of brilliant displays on the big stage. July’s third-place playoff clash with Belgium was the last competitive fixture he’s played in for England as his lack of minutes at Chelsea have led to players edging their way in ahead of Loftus-Cheek.

The midfielder has only been used in meaningless friendlies against Switzerland (September 11) and the USA (November 15) this season while being left on the bench in Nations League games against Spain (September 8) and Croatia (November 18). While he remains on the periphery at Chelsea, his chances of staying in the England squad diminish.

What options does Loftus-Cheek have in January?

Loftus-Cheek’s contract at Chelsea runs until 2021 so he’ll be forced to stay at Stamford Bridge if the Blues refuse to sell him, but a loan move away in January could be a temporary solution. It worked at Palace last season and could be the key to him getting his career back on track this campaign.

The 22-year-old won’t be short of offers given how much interest he had after the World Cup, but he needs to be willing to take a step down to ensure he’ll be a first-team regular. Joining a big-six club could see him in a similar predicament as he finds himself in at Chelsea, so a mid-table Premier League side might be the ideal destination for a few months.

As for next summer, it’s time for Loftus Cheek to admit defeat in his quest to be a Chelsea mainstay and seek greener pastures elsewhere. There will be plenty of suitors around Europe who would do more for his development than he’s had at Stamford Bridge, as the likes of Jadon Sancho has shown at Borussia Dortmund.