Five games into the season is early for any manager to be sacked especially with a side just one point outside the playoff places. Here is why those in charge at York City had no choice.

York City at their home Bootham Crescent have a proud Football League history, even if most of the time they have competed in the lower levels of the game. Over the last couple of decades their fortunes have taken a turn for the worse with many campaigns in non-league football. However, they were in League Two as recently as 2015.

Back-to-back relegations saw them compete in the National North last season for the first time in their history. Gary Mills started the campaign with the club having been unable to save them from relegation in 2016. Yet by the start of October, he was replaced by Darlington manager Martin Gray with the side outside the playoff places.

However, despite having arguably the biggest budget at this level, he was unable to take them into the top seven as they fell away in the final few months of the season.

Gray was adamant he needed to bring in his own players over the summer before he should be judged. The squad has largely been overhauled in pre-season, making them one of the favourites again for the National North title this year.

However, they have again started slowly despite sitting in eighth, one spot outside the playoffs. York have only picked up seven points from a possible 15. This led City to sack Gray on Sunday. A decision that can be justified.

Ex-Sunderland player Gray had his first managerial job at Darlington, where his results on paper were outstanding. He achieved three promotions in five seasons taking the Quakers from the Northern League to the National North and in his final season with the club they finished fifth in the second tier of non-league.

However, despite his success, his style and tactics came under fire from supporters. His ideologies can be described as one dimensional with a target man up front. While this brought success at Darlington it wasn’t pretty to watch. As is so often the case with managers who play that way it is fine when the results are going well, but when they aren’t fans turn quickly. Just ask Tony Pulis.

Another factor behind his success in the North East had been as Darlington came back through the leagues they had one of the biggest budgets in the divisions they played in. While you still have to put the team together and win the games the finances he had available have to be taken into account.

The way he left Darlington left a bitter taste in fans mouths and his time at York did not start with great optimism.

Fans' impact, especially higher up the pyramid, is often underestimated. The Wenger out movement at Arsenal for example, did it have any real impact despite its high publicity? However, the York fans opinions on Gray ultimately may have proved to be the deciding factor for those at the top of the club. Throughout last season results and the style of play led to heavy criticism from fans who had started the season expecting them to challenge for the title never mind struggling to make the top seven.

However, after the side has failed to pick up at the start of the season Sporting Director at the Club Dave Penney said enough was enough.

“The performances haven’t been good enough either and have led to unrest among supporters. You obviously listen to the boos at half-time and at the end of home games and that has an effect because, as a board member, you can’t ignore it and they have been vocal at other grounds as well. We gave Martin a chance to bring his own players in during the summer to see if there was an improvement, but we don’t think there has been."

While the results have been poor I honestly believe had the crowd been behind Gray he would have had longer than five games this season.

That being said, it has pretty much been a disaster for Gray at York. Despite mixed opinions at Darlington, he was very successful on the pitch. He will get another chance, he previously has been linked with Hartlepool United. However, for Gray his next job is crucial to rebuild his reputation.

For York fans, they have questioned why they didn’t make the change in the summer rather than let Gray spend the cash only to get rid of him five games into the new campaign. However, they have given themselves plenty of time for whoever, they bring in to turn it around and there is no reason why they can’t make the playoffs this season.

Who says fans don’t have any power. 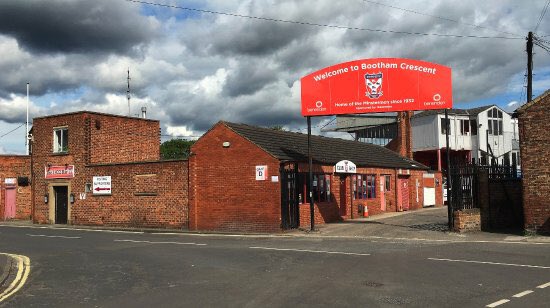