It is one of the most shocking declines in world football. Alexis Sanchez went from being the star at Arsenal to a flop at Manchester United. It was both quick and painful to watch. Initially, it seemed a management problem was to blame. After achieving considerable success in his first season at Old Trafford, Jose Mourinho could not maintain the standard he had set. The Portuguese manager did not cover himself in glory with his tactics or player approach. United struggled on the pitch. That, despite adding talent such as Romelu Lukaku, Fred and Sanchez to a squad which was already reasonably good.

Naturally, Mourinho was cut loose. No longer burdened, some may have thought Sanchez would use the opportunity to step up and prove it was the manager's ways that had stifled him. At first, such appeared true. The Chilean winger made some important contributions as Ole Gunnar Solskjaer’s tenure began on a promising note. Unfortunately, it didn’t take too long for everything to collapse again. Injuries and poor form have become the player’s identity in Manchester.

That may well be the case for Sanchez and United. If so, parting company is the best solution. Especially when considering the cost of maintaining him with regard to wages. He's earning an astonishing £350,000 per week. It's understandable, then, there has been much speculation concerning his future. Solskjaer must carry out a major squad overhaul to get the club back to where it belongs. Clearing out deadweight is a necessity.

If Sanchez is on the chopping block, he has chosen the Copa America to send a message. 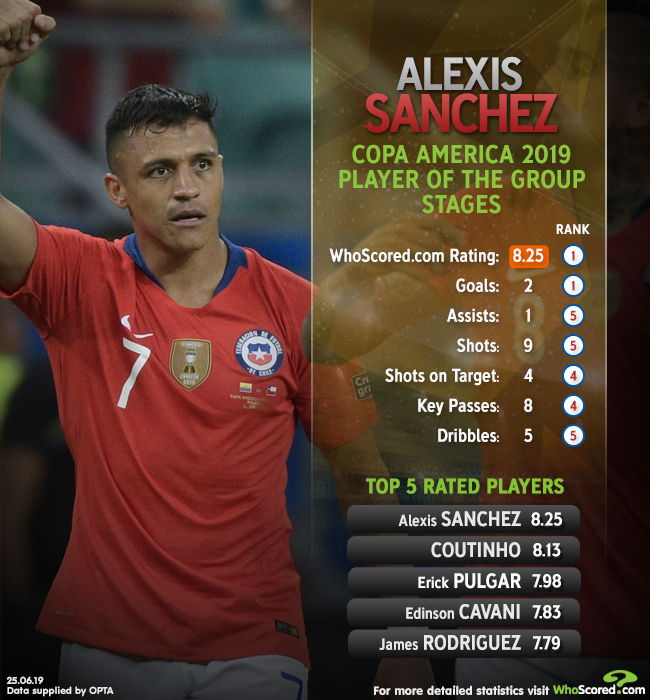 WhoScored.com
WhoScored
Follow
He may have endured a disappointing season for Manchester United, but @Alexis_Sanchez was in flying form for 🇨🇱 @LaRoja 🇨🇱 was he landed a WhoScored rating of 8⃣.2⃣5⃣, that better than any other player in the group stages of the #CopAmerica https://t.co/PioAJamOeE
Follow
12:00 PM - 25th Jun 19
30
97

For an attacker who scored just one Premier League goal this past campaign, Sanchez has done well to rediscover his touch in Brazil.

Chile shocked South America to win the last two Copa Americas. They downed Lionel Messi's Argentina in both finals. Eduardo Vargas, Gary Medel, Arturo Vidal, alongside Sanchez have been instrumental to La Roja's achievements. Interestingly, the group is at it again.

Chile's qualification from the first round was secured with relative ease. They thrashed Japan, 4-0, before overcoming Ecuador, 2-1. A narrow defeat to Uruguay last time out had no bearing.

Sanchez has stolen the show so far. He scored in back-to-back games to help book a quarter-final place. His performance against both Japan and Ecuador brought back memories of his very best.

Next up is Colombia. It is a tough challenge. Los Cafeteros won their three group games without conceding a goal. For Chile to have a chance, Sanchez must continue to perform. Doing so won't only assist his nation, but it could also transform his club career.

Admittedly, at 30, Sanchez' time is running out at the top level. In fact, his best days may well be behind him. Still, the winger has the potential to give a few more excellent years. Whether that's at Man United remains to be seen.

Solskjaer perhaps wants rid this summer. Alternatively, Sanchez could look to put his Old Trafford nightmare to an end. Clubs will no doubt be keeping track of him in the Copa America.