What to expect from Christian Pulisic at Chelsea

Chelsea had replacing Eden Hazard in mind when agreeing on a deal for Borussia Dortmund’s Christian Pulisic. The Blues avoided the summer transfer rush by getting their target in January then loaning him back to BvB until season’s end. In preparation for making his Stamford Bridge bow, will the 20-year-old go on to excite Premier League enthusiasts?

Pulisic stole the limelight at a young age. After impressing in Dortmund’s youth teams, he made his senior debut at 17. The precocious winger went on to grab two Bundesliga goals in eight appearances that campaign. His name spread from Germany across Europe due to form during the following two seasons, in which he tallied 14 assists as well as netted eight times himself.

Pulisic’s game time has since tailed off. He started 19 fewer competitive matches this campaign than last. Partly owing to five separate muscle injuries which kept him sidelined for a little over two months, his role also diminished due to Dortmund’s vast array of attacking talent. Manager Lucien Favre can call on Mario Gotze, Jadon Sancho, and Marco Reus.

Despite lacking minutes, Pulisic still ended the season with four Bundesliga goals and assists apiece. He must post greater numbers in the Premier League, though. He’s tasked with filling huge boots at Stamford Bridge. Hazard’s move to Real Madrid leaves Chelsea without their chief game changer, one who was influential in two title triumphs and named club Player of the Year on four occasions. 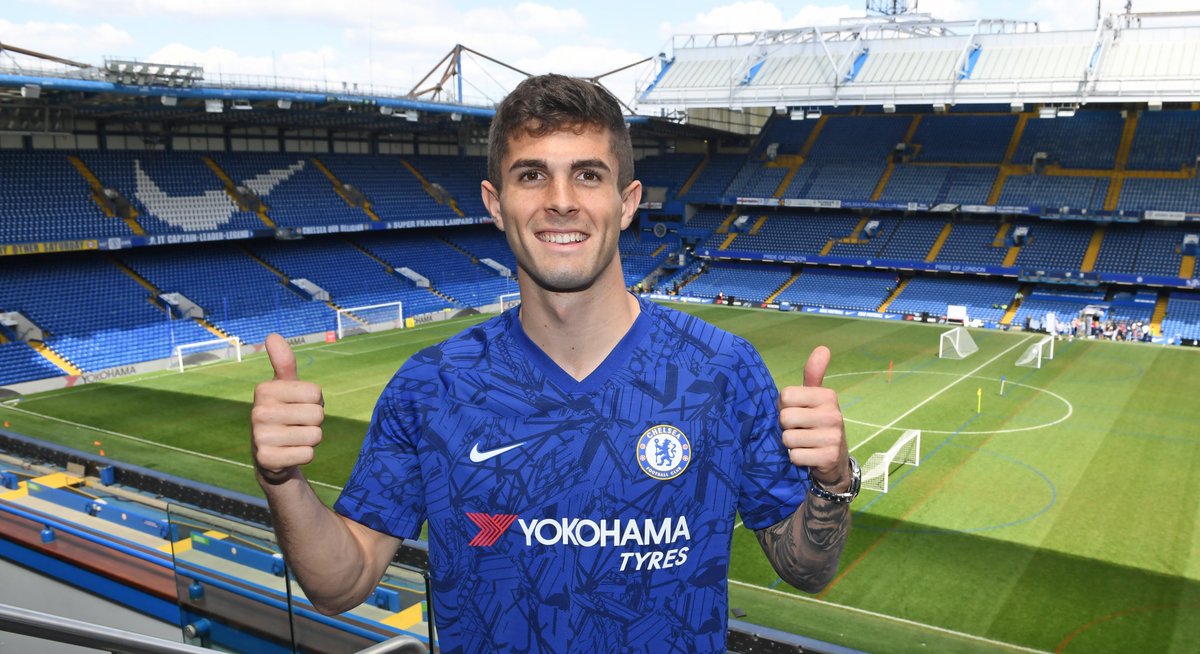 And he's had his say on the Belgian's future too.

There is some concern regarding Chelsea’s attack. It runs deeper than losing Hazard. Olivier Giroud may have bagged 11 Europa League goals this season yet he’s never proven as reliable in England. The Frenchman is unlikely to do so anytime soon. As things stand, he’s the Blues’ main striker in view of Gonzalo Higuain’s frustrating loan spell ending and Alvaro Morata’s lease to Atletico Madrid until June 2020.

Out wide, Pedro and Willian are both failing to reach the expected standard, too. Particularly the latter, who has scored only three league goals since August. To compound things, Callum Hudson-Odoi suffered an Achilles injury in April which is expected to rule him out for the campaign’s start.

The situation means Pulisic should get a fair crack of the whip. Whether he’d have received it if Maurizio Sarri had still been in charge isn’t certain. The Italian often overlooked youth during his 11-month tenure, favouring to select from a small, experienced pool instead. Ruben Loftus-Cheek and Andreas Christensen, both 23, made only 12 league starts between them under Juventus’ new boss. Hudson-Odoi, arguably the most deserving, started a meagre four games.

The man widely expected to replace Sarri has an all-together different approach. Frank Lampard is a firm believer in developing youth. At Derby County this season, his first in management, he gave prominent roles to Fikayo Tomori, 21, Jayden Bogle, 18, Mason Mount, 20, and Mason Bennett, 22. It worked. The Rams thrilled on their way to the Championship play-off final. Defeat to Aston Villa doesn’t detract from Lampard’s achievement.

Should the Englishman take over Chelsea’s reins, he’ll have a promising prospect on his hands in Pulisic. Playing from either wide position, the United States international can weave magic effortlessly, using both his good close control and sublime dribbling to devastating effect. Moreover, his acceleration offers a genuine threat in behind.

Pulisic is currently on Gold Cup duty with the USA. He started the opening game 4-0 victory over Guyana before making the scoresheet in a 6-0 rout of Trinidad & Tobago. The Pennsylvania-born winger then had a 25-minute cameo during the 1-0 win over Panama earlier today. Next up for his USMNT is a quarter-final clash against Curacao, on Sunday.

Pulisic has the ability to become a Chelsea success, no doubt. But talent alone isn’t enough. Hazard arrived as a 21-year-old and left seven years later as a legend. In contrast, then-20-year-old Oscar was tipped for big things at Stamford Bridge but seven years on finds himself languishing in the Chinese Super League.

Which of the two’s footsteps will Christian Pulisic come closest to treading?